That’s What She Said – The Twisted Party Game (Base Game)

Added to wishlistRemoved from wishlist 0
Add to compare
$45.99 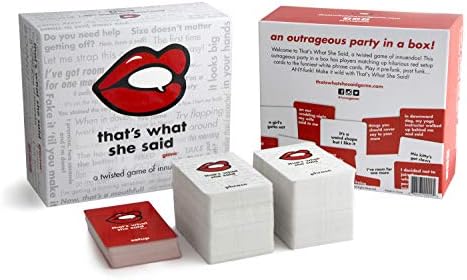 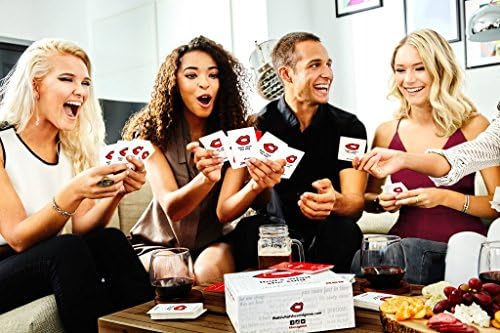 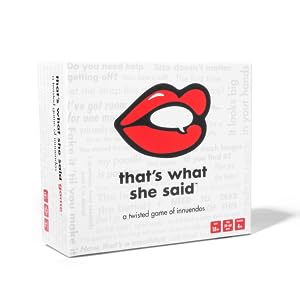 We all say it. Now lets play it.

that’s what she said, the twisted party game where sidesplitting laughter is the norm. you may, in fact, wet your pants.

“This game is as twisted as your mind wants it to be!”

bring that’s what she said to the next girls night and learn all your friend’s secrets.

that’s what she said is the perfect game to bring to family game night… but only if you can handle hearing your best friend (or dad) say ridiculously twisted things!!

brides and bridesmaids! host the ultimate bachelorette party by bringing that’s what she said—it’s the board game equivalent of spiking the punch. 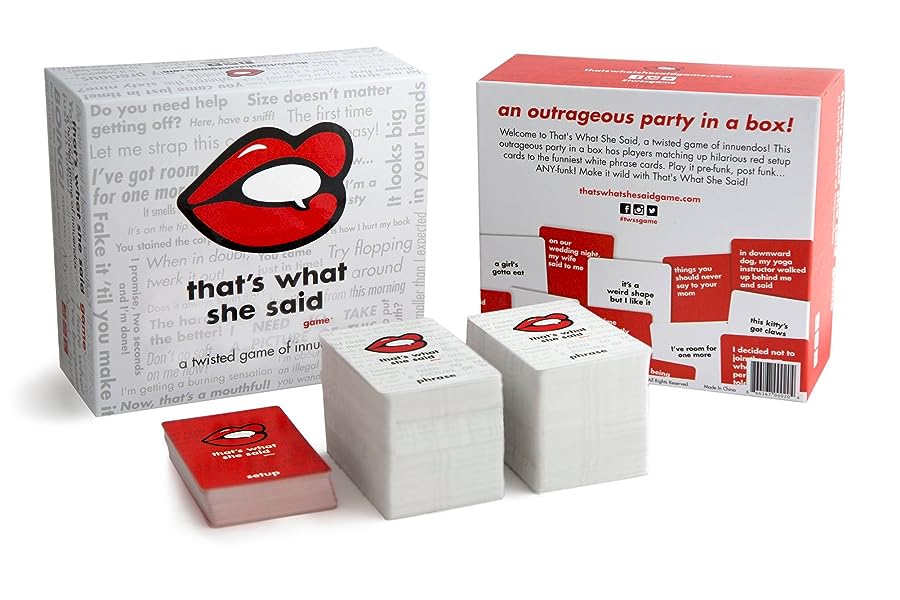 designed for four or more players, that’s what she said takes 30-60 minutes to play. unlike other party games, all the cards within the game are designed to work together to maximize the evening’s hilarity and minimize those awkward well-that-wasn’t-funny moments. also, after each round, players can discard one card that doesn’t tickle their pickle (twss) and redraw to keep their hand funny and fresh. the player known to be the most twisted of the bunch is the first judge, and starts the game by reading a red setup card to the group, while the remaining players select the most hilarious card from their hand for consideration. the judge awards the winner the red setup card as a marker, and the first player to collect five setup cards wins.

Our fans are saying:

“A better version of Cards against Humanity”

“We laughed until we cried!”

“Always a hit at any party!”

“This game takes funny to a whole new level!”

The perfect party game for friends that didn’t make the nice list this year. That’s What She Said makes great gifts for friends that are always cracking jokes or tagging you in memes. Fans love this game and they all agree that friends still talk about their fun night weeks after playing.

Whether you’re exchanging gifts in person or virtually, That’s What She Said is a must-have. We have all played Cards Against Humanity, so bring a fun new game that’s sure to be a big hit. Be the one who brings the gift everyone wants the most, literally everyone will be fighting over it!

Play longer and harder with the expansion packs!

Add 80 new setups and 120 twisted one liners to your base game! that’s what she said expansions will keep the fun going all night long!

Make it a bundle and get the base game with both expansions. Just click on the link below to check it out!

Play harder and longer so the fun doesn’t end

An outrageous party in a box, perfect for your next get-together or game night. It’s the board game equivalent of spiking the punch!
Great for parties! Fast paced and hilarious on every turn—a perfect twist to Cards Against Humanity.
This game is as twisted as your mind wants it to be. Play with different friends for wildly different outcomes!
458 Cards (400 White Phrase Cards and 58 Red Setup Cards) | 4+ players | 30-60 min | Ages: 17+
Play it pre-funk, post funk… ANY-funk! Take this with you to bachelor or bachelorette parties, ladies night out, holiday parties, college reunions, and 21st birthdays.

That’s What She Said – The Twisted Party Game (Base Game)